With Doctor Who‘s 50th anniversary special now less than a week away, BBC America has dropped a buncha new photos from the much-anticipated TV event.

Exactly how many of these are brand-new photos from the Steven Moffat-penned Doctor Who: The Day of the Doctor, I admittedly cannot tell. (I chose getting them to you over math.) But there are many, some featuring guest stars John Hurt and Billie Piper, plus David Tennant aka the Tenth Doctor.

VIDEO | Time Lords Unite! Doctor Who: The Day of the Doctor Trailers Bring Together Fan Faves

The logline for the milestone outing: “In 2013, something terrible is awakening in London’s National Gallery; in 1562, a murderous plot is afoot in Elizabethan England; and somewhere in space an ancient battle reaches its devastating conclusion. All of reality is at stake as the Doctor’s own dangerous past comes back to haunt him.”

VIDEO | Doctor Who 50th Anniversary: Eleven Can’t Run From ‘The Day of the Doctor’

Doctor Who: The Day of the Doctor will be globally (universally?) simulcast next Saturday, Nov. 23, at 2:50 pm ET, with an embellished encore airing at 7 pm that evening. 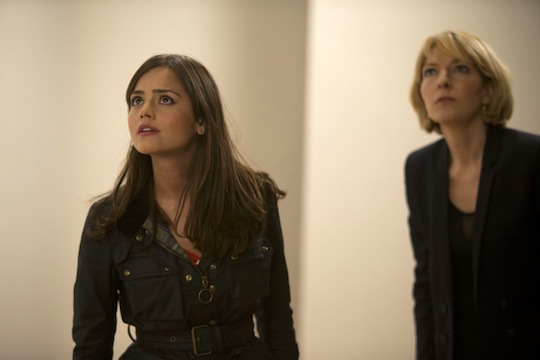