There will most definitely be strings attached when Glee airs a Thanksgiving-night episode (9/8c on Fox) — but we’re not talking about the kind that keep giblets and stuffing in your turkey’s cavity.

Instead, as the following photos reveal, puppets are paying a visit to the musical dramedy!

We’ve mixed in Fox’s official promo images — which show Jake and Marley reconnecting inside the halls of McKinley High, Sue explaining the origins of her tracksuit, and the debut of the NYC kids’ cover band Pamela Lansbury — with a pair of pics Tweeted by Lea Michele that show herself, Chris Colfer, Naya Rivera and Adam Lambert in plush miniature form. (We’ve also included a bonus image of Chord Overstreet from Nov. 21’s “Movin’ Out.” You’re welcome.)

Click through the gallery below, then hit the comments. Are you excited for Glee‘s puppet show? Sound off now!

If you like TVLine, you'll LOVE our email news alerts! Click here to subscribe.
Glee Sneak Peek: Puppets in NYC! Jarley in the Hallway! And the Debut of Pamela Lansbury! 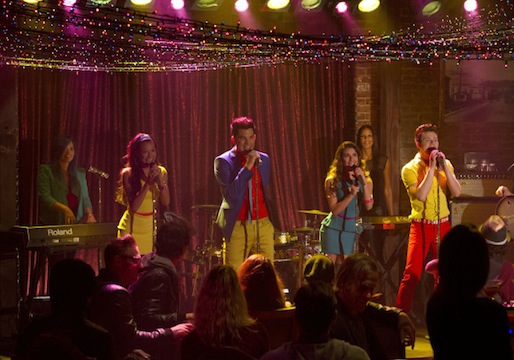