This Monday on Castle (ABC, 10/9c), Rick’s in the midst of verbally crucifying Alexis’ choice of live-in boyfriend when he and Kate come across a crucifixion-style murder — and we’ve got a first look at the grisly discovery.

PHOTOS | Can Castle Solve the Mystery of Pi?

In this clip from the episode “Get a Clue,” Rick is in the midst of ranting about Pi, the “ambition-free hippie”-slash-“New Age crusader”-slash-career manchild (watch for Kate’s awesome eyeroll), when they arrive upon the crime scene, where a woman was found dead with stigmata-like wounds. Add in some strange symbols in the victim’s apartment and a suspicious monk, and Castle becomes convinced they’ve stumbled upon a Da Vinci Code-style conspiracy.

Speaking of Alexis: We’ve also included below some photos from the Nov. 4 episode, “Like Father, Like Daughter,” in which Castle’s daughter enlists his help on an Innocence Review case, to prove that a death row inmate is innocent. Justified‘s Joelle Carter guest-stars as the inmate’s longtime girlfriend. 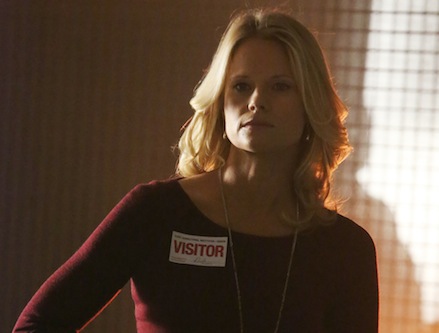