The CW’s The Vampire Diaries will literally give it the old college try in Season 5 (bowing tonight at 8/7c), when Elena, Caroline and even (however briefly) a secretly dead Bonnie make their way to a nearby university for some frat boy-filled, dorm room-living, freshman-year fun.

Annnnd then we come back down to reality and remember that this is TVD we’re talking about, where danger and drama run rampant, and the guys of the Greek system can’t hold a candle to those undead Mystic Falls men. That doesn’t, however, mean that the additive saga will falter in the always tricky transition into college.

“The writers just knocked it right out of the park,” Vampire starlet Candice Accola assures TVLine. “I loved the [premiere] and thought it was really, really fun.”

And that’s not all the actress is excited about in the new season. Here, Accola details Caroline’s future with Tyler (and Klaus!), the reveal of Silas’ secret identity and more.

TVLINE | It can be really tough to transition a show from high school to college. How do you feel The Vampire Diaries has done so far?
I love the first episode, but I can completely resonate with what you’re saying. I was a little worried for the college years, because they usually are really awkward. You know, on Boy Meets World they all went to college, and it was really weird! And I didn’t like Saved by the Bell when they did it. [Laughs] These were the experiences that I was pulling from. But the writers just knocked it right out of the park. It’s also an easier transition because the joke is that we never saw these students in high school much — especially in Season 4 — so we’re not going to miss those classroom. And we’re still attached to Mystic Falls, because Damon, Jeremy and Matt are there. It’s not like we’ve departed completely.

TVLINE | And there’s obviously a lot going on back in Mystic Falls with the Silas/Stefan of it all. How involved will Caroline and Elena be in that storyline?
The secret’s gotta come out of the bag at some point. They’re not going to be kept in the dark forever.

TVLINE | Back on campus, will Caroline and Elena become embroiled in any supernatural battles of their own?
I think everyone has an idea that the college experience is not going to be all about frat parties, that there’s going to be supernatural goings-on at college — otherwise this would be a really boring series and they would totally have to change the name from Vampire Diaries to College Life or something. [Laughs] There will definitely be supernatural stresses that follow them to college, and they’re really great. We’re also going to meet some new characters, we’re going to learn about more of the mythology and we’re going to really see all of these characters come together.

TVLINE | Talk specifically about the moment the girls learn that Bonnie’s actually dead.
Eventually the characters are going to come into the light about what is really going on and the bigger picture, and it’s going to be really hard truth to face. For the viewers, they’re going to be opened up into a whole different world and it’s going to be an opportunity for them to learn more about the mythology of Mystic Falls.

TVLINE | Give us a little overview of Caroline and Tyler’s status leading into the premiere.
Caroline is just head-over-heels excited, happy, and ready for Tyler to get to college, so that they can fulfill their destiny of just being the happiest, best couple on the college campus, ever. [Laughs] She has no idea where he is, and she doesn’t really care because she knows he’s going to show up and everything’s going to be just as she’s ever imagined it.

TVLINE | On the other end of Caroline’s love-life spectrum, can fans look forward to any mention of Klaus? Or is that pretty much on the backburner at this point?
It’s backburner going into [the season]. At this point there’s not really been talk of Caroline officially popping into New Orleans anytime soon, but Klaus definitely does come up in conversation as the season progresses, and we all get a taste of exactly how she feels about him.

And now for some word association fun! We asked Accola to reveal the first word that comes to mind about the Mystic Falls vets in Season 5 — and the things she came up with are fun, surprising and a tad bit confusing. (It’s OK, we’ll still bite!) 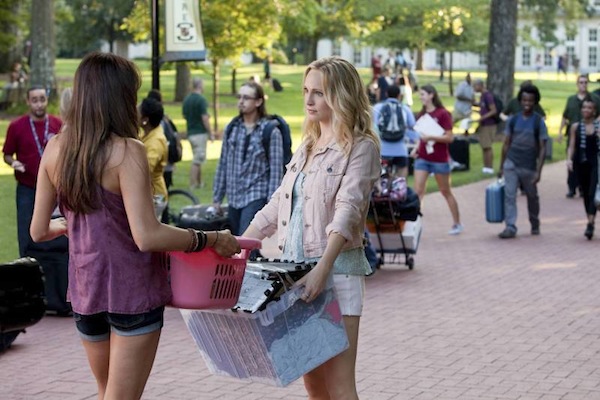