We’ll give it to Grey’s Anatomy — they know how to throw a party.

For the show’s landmark 200th episode, airing next Thursday, Oct. 10 on ABC, the doctors of Grey Sloan host a charity gala to bail the hospital out financially in the wake of The Storm of 2013 — and we’ve got a first look at the lavish (and tense) affair.

“They’re fighting to [see] who can raise the most money,” explains Sandra Oh. “There’s a vintage Cristina moment that she has with Alex where she’s just going on about how great she is.”

Adds Kevin McKidd, whose Owen comes up with the idea for the event with Jackson: “They’re brilliant surgeons, [but] they’re maybe not the best party organizers. So things take a really interesting turn, and maybe it doesn’t go as well as its meant to.

“There are a few great twists in the episode which are really fun, and it’s a real celebration,” he adds. “It’s a really warm, sort of uplifting, upbeat episode.”

Scroll through the gallery below and riddle us this in the comments: Who’s the random dude (played by Emil Beheshti) delivering what appears to be bad news to Callie? 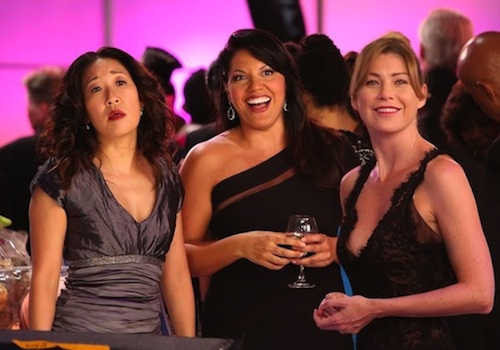