The photos below are from the next two episodes of the ABC musical drama. First, on Oct. 2 (10/9c), the “Red Lips, White Lies” headliners meet their new boss. He’s got definite plans for the ladies’ careers, but will his vision mesh with Rayna’s hopes for her own label and Ju’s pursuit of a more mature sound and image? (Based on Ms. Barnes’ face, we’re gonna say no.)

Then, on Oct. 9, Will and Scarlett strut their countrified stuff at a Stockholders Showcase, while Gunnar and Zoey cheer them on from the crowd. (Does Picture 14 make anyone else think that Brent — aka the guy Will nearly kissed in the laundry room in this week’s episode — and Jeff may be in cahoots? But Picture 15 is full of fist-bumping goodness, so maybe we’re just being paranoid?)

Click through the photos below   with your predictions about what’s ahead. 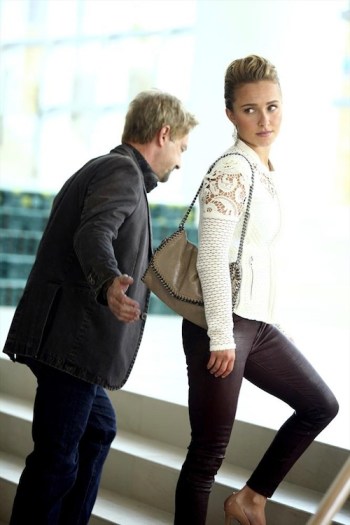