On the cusp of breaking away to start their own firm, Alicia and Cary will go after a big fish, as evidenced by these new photos from Season 5 of CBS’ The Good Wife.

In the coming season’s second episode (airing Oct. 6), Alicia and Cary sue the NSA on behalf of search engine/frenemy Chumhum — unaware that in doing so, Lockhart/Gardner has landed in the spy agency’s notorious monitoring crosshairs.

The courtroom photos offer a first look at Outsourced alum Ben Rappaport as Alicia and Cary’s new colleague, Carey — who is fated to join them once Florrick, Agos & Associates gets of the ground — plus judge Jeffrey Tambor.

Elsewhere in the episode, Alicia gets some unexpected help from her mother Veronica (returning player Stockard Channing).

If you like TVLine, you'll LOVE our email news alerts! Click here to subscribe.
The Good Wife First Look: Alicia and Cary Take on the NSA -- Plus: Meet the 'New' Carey! 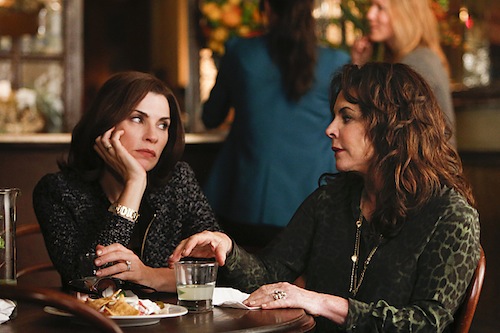