What does a European vacation, an extreme makeover and a visit from the Fonz have in common? They’re among the highlights of Parks and Recreation‘s Season 6 premiere — and TVLine has your first look at the action-packed, super-sized installment (8/7c, NBC).

Leslie jumps at an opportunity to travel to London to accept an International Women in Government award, and she takes Ben, Andy (Chris Pratt, in fighting form for his role in Guardians of the Galaxy), April and Ron across the pond with her.

Meanwhile, back in Pawnee, Jean-Ralphio and his sister Mona-Lisa (SNL‘s Jenny Slate, reprising her role) are reunited with their father (special guest star Henry Winkler) under what looks like tense circumstances — and Tom is, of course, right in the thick of the drama.

Conspicuously missing from the photo spread: The departing Chris and Ann!

Scroll through the gallery below, then make your way to the comments.

If you like TVLine, you'll LOVE our email news alerts! Click here to subscribe.
Parks and Rec Sneak Peek: Andy Looks 'Super,' [Spoiler]'s Back and The Fonz Vs. Tom?! 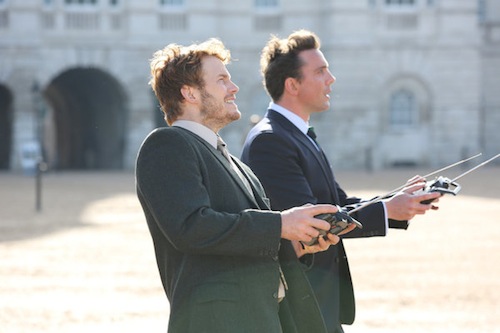