There’s a new Prince of Thieves in town as Once Upon a Time opens Season 3 — and he has his bow-and-arrow trained on (gulp) Neal/Baelfire.

PHOTOS | Fall TV Spoiler Spectacular: Exclusive Scoop on Once and 44 Other Returning Faves

In the latest batch of pics from the ABC drama’s coming season, you meet the new Robin Hood aka Sean Maguire (Kröd Mändoon, EastEnders), who stands to play a role in helping Neal return to Emma, Rumple et al — wherever they now may be. As series cocreator Adam Horowitz shared during TVLine’s Fall Preview Q&A, “We pick up with Neal right where we left him, which is with Aurora, Mulan and Phillip. And he’s got a big problem, which is he is as far away from his family as he’s ever been.

“Last thing he knows, Tamara was shooting him in a cannery!” the EP continues. “So, how is he going to get back?”

VIDEO | Hot Promo: Once Upon a Time’s Emma Is Ready for a Fight — With Regina?

Also, in a previous run of photos shared here, you get a taste for trouble aboard the Jolly Roger — namely, because Emma is looking pretty soggy in her fretting folks’ arms, plus everyone except for Rumplestiltskin is at the railing, screaming for someone obviously lost in the drink. (As revealed in ABC’s synopsis for the Sept. 29 premiere, the ship’s crew is “greeted by a school of not-too-friendly mermaids.”)

If you like TVLine, you'll LOVE our email news alerts! Click here to subscribe.
Once Upon a Time Sneak Peek: Robin Hood and Mulan Help Neal -- But Who's Gone Missing? 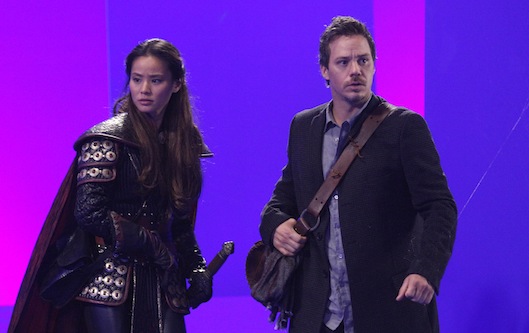