As a reality TV recapper, it’s always easier to rage against the machine — They cut the wrong girl! We didn’t need a fourth judge! A pixie haircut does not equal the second coming of Melanie Moore! — than it is to tip your hat or raise your glass when positive changes take effect.

But for tonight’s So You Think You Can Dance recap, I’m going to take the road less traveled and celebrate a trio of fantastic developments:

* The introduction of new blood to the pool of choreographers. (They may not have cooked up my very favorite routines, but they definitely slapped an oar against the surface of the pool to fight the process of stagnation.)

* The very necessary course-correction to save the week’s eliminations till the end of the episode, rather than announcing them before the start of the night’s competitive routines.

* The introduction of contestant-squeezing, superlative-spewing Paula Abdul to the judges’ panel. No, I wouldn’t want her on the show every week, but there’s a certain charm to her je ne sais crazy.

But enough of my upbeat manifesto…let’s get to the results:

BOTTOM 6 (BASED ON VOTES FROM LAST WEEK)
Jasmine M (WHA? After that Best-in-Show Tango???)
Jenna
Alexis
BluPrint
Curtis
Jade* (who’d already withdrawn at the top of the show due to a torn meniscus)

DANCING FOR THEIR LIVES
Alexis: A joyous tap routine with some wicked pointe work (that, to me, didn’t make up for back-to-back lumbering routines out of her own style)
Jasmine M: A frantic bit of contemporary work that was athletic, if not entirely fulfilling
Jenna: A basic bit of solo ballroom stuff, enhanced by a cascade of orchid fringe that swayed like Shakira’s hips on fast-forward

And now, let’s break down this week’s routines. Click through the images below for my take on the proceedings: 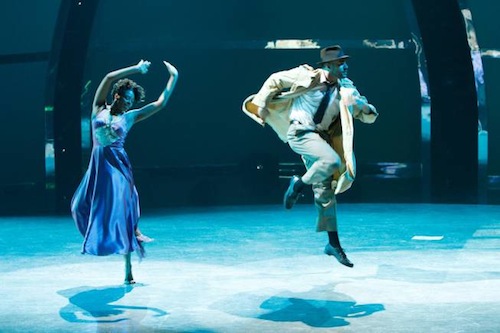