There’s more nameless dread (with a chance of intermittent sweetness) in the forecast on this Sunday’s installment of The Killing (9/8c on AMC) — and we’ve got your exclusive first look.

In an episode titled “Head Shots,” the Seattle PD task force investigating the murders of teenage runaways shuts down a business, while Linden and Holder unite in their pursuit of “the voice” heard speaking to Kallie in the child pornography DVDs they confiscated. Meanwhile, Seward is “offered motivation to comply with orders.”

Click through the four photos below, in which we see Holder offering a nutritious snack to Bullet; a moody Seward in his cell (looks like he’s bounced back from that razor incident); Holder at work in the interrogation room; and Seward’s inmate neighbor in a compromising spot. Has Peter Sarsgaard’s maybe-not-guilty-but-possibly-sociopathic prisoner been up to no good again? Discuss!
Follow @MichaelSlezakTV

If you like TVLine, you'll LOVE our weekly newsletter. Click here to subscribe.
The Killing Exclusive Sneak Peak: Holder and Bullet Bond, But What Has Seward Done Now? 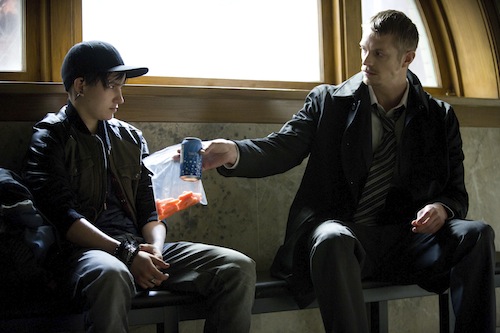