NBC’s Hannibal will be visited by a Dead woman on June 13 when Ellen Muth, the heroine of series creator Bryan Fuller’s late Showtime dramedy Dead Like Me, makes a guest appearance — and here’s your first look at the pair’s most unusual reunion.

“What was interesting about having Ellen [Muth] on the show was that there was actually an opportunity to deconstruct our previous collaboration [on Dead Like Me] in a very unexpected way,” Fuller has teased. “Her character has the same name, [George], and is a reinterpretation.”

Check out the gallery below (which includes a glimpse of Eddie Izzard’s June 6 stint as Dr. Gideon) and then hit the comments with an answer to this question: On a scale of 1-10 carving knives, how badly do you want NBC to renew this show for a second season? 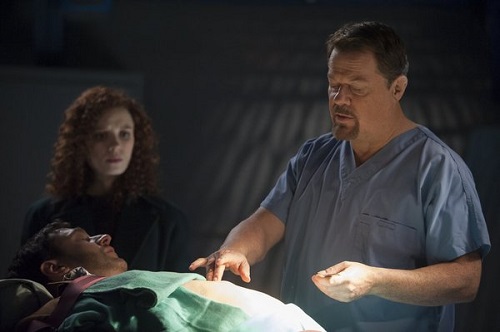