Revenge‘s Emily Thorne will soon find herself engaged to one of her many suitors. Will Aiden, the red Sharpie-wielding gal’s undercover lover, get down on bended knee? Maybe her former fling Daniel will pop the question? Or perhaps Jack, her childhood soulmate, will finally make a grab for his girl? Ponder no more: We’re spoiling the identity of Em’s soon-to-be fiancé in 3, 2…

As of the addictive drama’s May 5 installment (ABC, 9/8c), Emily will once again be betrothed to… her sexy ex-y Daniel Grayson!

The engagement news was first revealed in the upcoming episode’s official description, which states: “Emily plots her next move in her new role as Daniel’s fiancee, while Aiden struggles with the re-engagement.”

In an interview with TVLine just prior to the question-popping news leak, Revenge creator Mike Kelley prepped us for the major romantic shakeup awaiting fans. “The love rectangle — or Jack and Daniel and Aiden vying for Emily’s affections — will come to a head at the end of this season,” he teased. “Emily will be put in a position where she needs to make a profound choice.”

Could said choice be the one in which she recommits herself to an increasingly dark Daniel? We can’t be sure, though Kelley did playfully note — when asked who Emily really, truly cares about at this point — that the Grayson son has “given her little reason to have true affection for him because he’s been such a bastard in so many ways.

“As far as her future with Daniel is concerned,” he added, “for the time being at least, it’s firmly cemented in her revenge plan.”

So, there you might have it folks: This engagement shocker is all part of Emily’s revengenda.

Scroll through the gallery below for fresh pics from the April 28 episode, in which the on-again lovebirds’ engagement presumably takes place, then hit the comments: Are you down for the impending Daniel/Emily reunion? 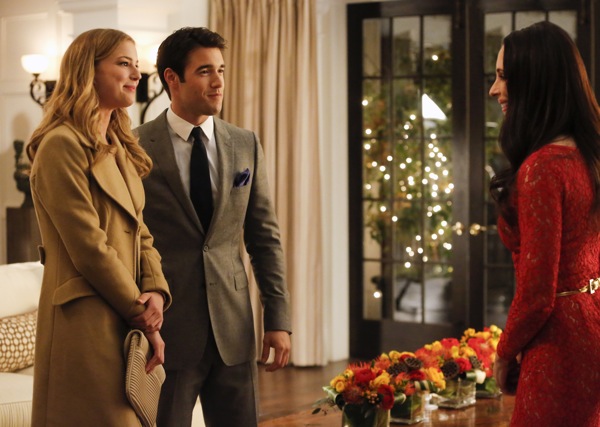