It looks as if The Walking Dead is throwing Andrea (Laurie Holden) out of the frying pan and into the fire in Sunday’s comeback episode (9/8c, AMC)!

Not only does she find herself smack in the middle of what appears to be a mob of her fellow townies, said townies are armed with everything from firearms to crowbars!

Plus, the hour — titled “The Suicide King” — introduces (and then most likely dispatches!) a particularly sexy new walker… played with to-die-for conviction by the show’s own co-exec producer/SFX make-up supervisor Greg Nicotero!

What do you think? Is Andrea finally going to wise up and shove off? Or will she elect to stand by the Governor in the wake of her old pal Daryl’s capture? Take a peek at the pics below, then hit the comments.

If you like TVLine, you'll LOVE our email news alerts! Click here to subscribe.
Walking Dead Exclusive First Look: Andrea Takes On the Mob! Plus — Who’s the New Hottie? 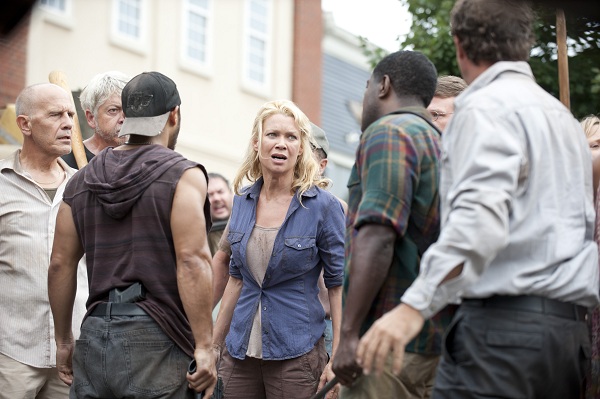