You know a show is gonna be pretty damn creepy when its posters alone are enough to give you the heebie jeebies! So it’s an awfully good omen for A&E’s upcoming Bates Motel that its promo art gives us goosebumps!

Click through the gallery below – that is, if you dare – to get a sense of the tone of the new series (premiering March 18). Far as we can glean from the images, the Psycho prequel – starring Freddie Highmore (Charlie and the Chocolate Factory) as a young Norman Bates – owes as great a debt to David Lynch as it does to Alfred Hitchchock.

What do you think? Our favorite is the one that seems to feature a cameo by Thing from The Addams Family. Or maybe the picture of the man afire. But they’re all pretty, um, nuts, wouldn’t you say (to say the least)?

If you like TVLine, you'll LOVE our email news alerts! Click here to subscribe.
Exclusive First Look: New Bates Motel Posters Are Not For the Faint of Heart! 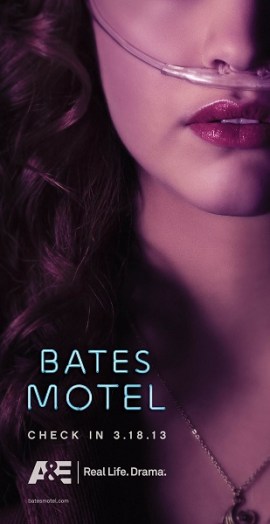