ABC’s Castle will pull what portends to be a glorious ‘Con in its Nov. 5 episode, when Rick, Kate et al investigate a snuffing at a sci-fi convention — and here’s a first look at the sure-to-be-meta adventure starring onetime Firefly captain Nathan Fillion.

Among the hour’s previously announced guest stars, Ed Quinn (Eureka) is playing Gabriel Winters, the former star of the cult hit Nebula-9 who didn’t go on to have the best career since; Christina Moore (That ’70s Show) is Winters’ onetime costar, now a successful film actress; Chris McKenna (One Life to Live) plays a Nebula-9 superfan who may have been romantically involved with the murder victim; and Erin Way’s (Alphas) character was a business partner of the deceased’s.

Jonathan Frakes (Star Trek: TNG) is directing the episode, and in fact he appears to make a cameo as a superfan of a different sort. Or is that just a cheeky choice of T-shirt? Check out the photos here.

If you like TVLine, you'll LOVE our email news alerts! Click here to subscribe.
Hot Shots: Castle Gets Its Comic-Con On -- Maybe Featuring an Out-of-this-World Cameo? 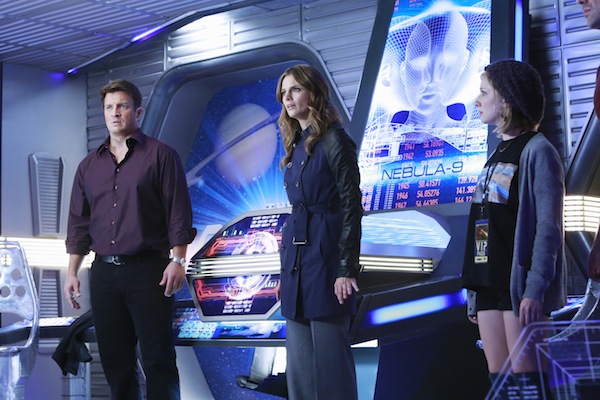