Whether you like your Stephen Amell rugged/hairy or cleaned-up/slick, this Arrow gallery is for you.

In these new shots from the first episode of The CW’s fall superhero drama, we see Amell’s Oliver Queen both during his shipwreck-induced island stay (where he could double for Saturday Night Live’s The Falconer) and after his rescue (where he could double for a GQ cover boy). It’s after he returns to society, of course, that the presumed-dead playboy becomes a bow-wielding vengeance machine.

We also get one shot of Willa Holland as his sister Thea – but really: It’s all Amell, all the time. You’re welcome.

In other Arrow news that hits the bulls-eye: DC Comics veteran scribe/exec Geoff Johns announced on Twitter that he is cowriting Episode 7, which introduces Jessica De Gouw as the Huntress.

Arrow debuts Wednesday, Oct. 10 at 8/7c. Click through the gallery below and then hit the comments with your thoughts on the pilot pics!

If you like TVLine, you'll LOVE our weekly newsletter. Click here to subscribe.
Arrow Hot Shots: Oliver Gets His Super Start -- Plus, Geoff Johns to Pen Huntress Episode 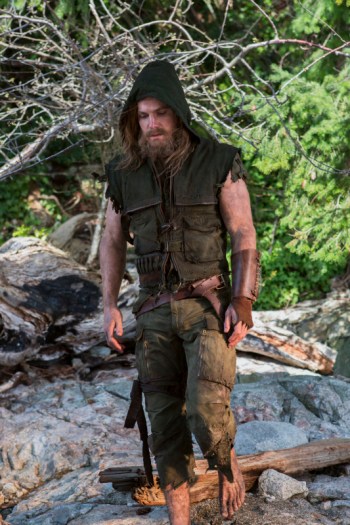