The march toward Season 4 of Glee continued Monday with the release of the show’s official cast portraits.

With the exception of Dianna Agron (Quinn) and Jayma Mays (Emma), both of whom were out of the country working when the pics were snapped, pretty much all of the usual suspects — and a few new ones! — are present and accounted for (just as they were in this recently released group shot).

Click through the following gallery to view all the new “class photos” and to sneak a peek at the season premiere, “The New Rachel,” in which Unique, Brittany, Tina and Blaine ask Artie to pick one of them as New Directions’ next star.

If you like TVLine, you'll LOVE our email news alerts! Click here to subscribe.
Glee Hot Shots: Check Out the Season 4 Cast Portraits! Plus: New Directions Picks Its Star 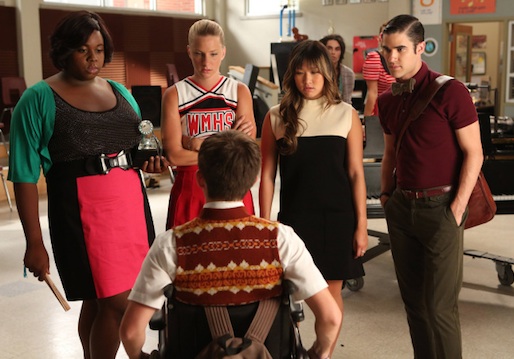