Last night’s Love in the Wild challenge had all the makings of a good Nancy Drew Mystery: A map in five pieces, a precarious ladder on the side of a cliff, a spooky cave, a runaway horse, and buried treasure. (The Secret of the Inexpensive Summer Reality Series?)

More importantly, though, we got down to the final two couples: Ken & Yanina pulled off a come-from-behind win, and got to choose between their closest friends/toughest competitors (Summer & Chase) or the couple who seemed easier to beat but also more genuinely in the early stages of romance (Michelle & Ben).

There were tears (Yanina), a few snarky put-downs (from Ben), and a weave thicker and (most likely) more absorbant than a ShamWow (hi, Jenny McCarthy). And in the end, Ken & Yanina chose Michelle & Ben, so the two most appealing couples advance to the finale. Huzzah!

Beyond that, the pertinent details are all captured in the timeless form of the screen grab. So click through the gallery below, then hit the comments and share your thoughts on Episode 7, and which “couple” you’re rooting for in the competition/in life. 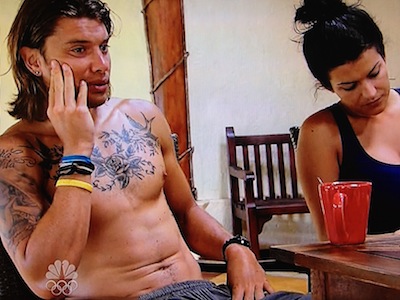