Last week’s unexpected double elimination made it a pretty safe bet that none of the final three couples would go home on Tuesday’s installment of Love in the Wild, but the good folks at NBC did their best to squeeze a full hour’s worth of drama out of the proceedings. I’m okay with that, since it also meant more opportunities to strengthen the troika of “love connections” that have percolated over the last six weeks.

Yes, yes, I kinda sorta believe a couple of these crazy kids might make their relationships work once the season wraps. Tragic of me? Sure. But with Season 3 of Bachelor Pad only a few weeks away, my inner romantic is looking for a branch to cling to as it prepares to wade into a river of skankitude.

If you missed the episode, Ken/Yanina won the final challenge, beating out Ben/Michelle and Chase/Summer, but because that only took up 20 or so minutes, we were treated to some trumped-up tension between the latter two couples, and a couples ceremony where contestants were grilled about their partners’ personalities. Ben and Michelle triumphed, and will get a 30-second head-start in next week’s final challenge. Oh, also, no one got eliminated.

Beyond that, the pertinent details are all captured in the timeless form of the screen grab. So click through the gallery below, then hit the comments and share your thoughts on Episode 6, and which “couple” you’re rooting for in the competition/in life. 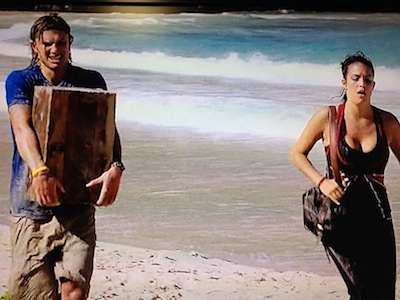