It looks like The Walking Dead’s Merle’s been busier than a one-armed… well, you know.

The latest photo released from the AMC drama’s upcoming third season shows Daryl’s presumed-dead brother — played by Michael Rooker — alive, well and sporting something in place of his missing arm. (You’ll remember that he hacked off his limb, 127 Hours-style, to escape death by zombie after he was left chained to a rooftop in the first season.) Aside from appearing in Daryl’s dream last season, Merle’s been MIA.

Other photos released by the network show Danai Gurira’s Michonne wielding an intense-looking blade, Andrew Lincoln’s Rick staring someone (someones?) down with a gun and David Morrissey’s The Governor looking pretty darn wary. 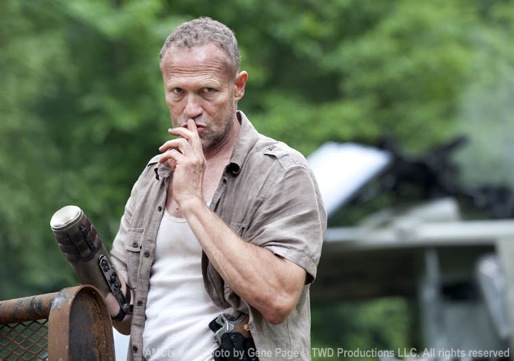