NBC’s oddly addictive Love in the Wild kicked off its second season Tuesday night, and while I could give you a straightforward recap of the proceedings, that would erroneously assume that anyone in America “cares” about who “won,” who “lost,” and who ended up in the dreaded “Unmatched Area.”

All you really need to know about the Season 2 premiere is this: New host Jenny McCarthy was a bawdy, spontaneous upgrade from that dude who clumsily stumbled his way through the proceedings last year; the seven ladies were saddled with two men apiece for the bulk of the episode, then each had to narrow it down to a single partner at the end of the two-hour telecast; and there’s screen-grabbable goodness aplenty in this kooky adventure-dating series.

Click through the gallery below if you don’t believe me, then hit the comments and share your thoughts on the season premiere, and which “couples” you’re rooting for in the competition/in life.

If you like TVLine, you'll LOVE our email news alerts! Click here to subscribe.
Love in the Wild Season 2 Premiere: A Photo Recap of Snake Pits, Pole-Shimmying & More! 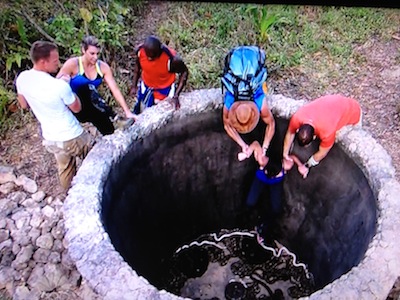