“My name is Mary Alice Young….”

ABC’s Desperate Housewives will conclude its eight-year run this Sunday at 9/8c, and from the look of these series finale photos, the two-hour swan song — titled “Give Me the Blame”/”Finishing the Hat” — will feature drama of the legal, familial and medical varieties, the hint of a romantic reconciliation (We spy someone holding hands!) and a callback to one of the Wisteria Laners’ favorite pastimes — a friendly poker game. Do you think the sudser’s very final frame will in fact be of the ladies playing cards, with so many years’ worth of highs and lows behind them?

Per ABC’s official synopsis for the series-ender, “Trip begs Bree to tell him what really happened the night of Alejandro’s murder as her trial begins to go south and it looks like she’s about to be convicted; Gaby tries to come up with a solution that will take the burden off of Bree; Susan tries to keep the sale of her house private until she’s had a chance to break the news to the ladies; Katherine Mayfair (played by Body of Proof‘s Dana Delany) returns to Wisteria Lane and offers Lynette an intriguing job opportunity – which could end her chances of reconciling with Tom; the women all agree to take care of Mrs. McCluskey when they discover that she wants to die with dignity at home; Susan finds herself at wit’s end when Julie goes into labor at the most inopportune time; and Renee is shocked to discover that, as their wedding nears, Ben has been arrested and thrown in jail.” Whew!

Will you be tuning in to hang with the Housewives one final time? 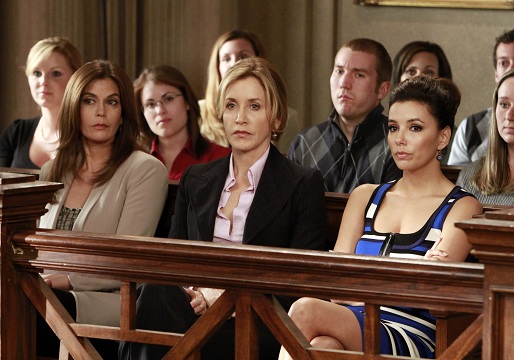