NBC’s 30 Rock went live this Thursday night, and the product was decidedly Saturday Night Live-lier than the sitcom’s first time flying without a net.

The framework for this live outing had Jack, Liz and 10 other characters locked in Tracy’s dressing room to (ostensibly) debate, 12 Angry Men-style, the pros and cons of TGS no longer broadcasting live. But it was mainly Kenneth doing the talking, as he harkened back to the network’s golden age of live programs such as The Lovebirds (aka a Honeymooners rip-off), a Dean Martin-esque variety hour and a ’60s-era romp not unlike Laugh-In. That teed up standalone vignettes in which the 30 Rock regulars would take turns as new characters — meaning they had to be purposely cropped out of the preceding scene, so the actors could sneak off for a quick wardrobe switch.

In the B-story, Jenna and Hazel — egotistically oblivious to the MIA status of everyone else — plotted to use TGS‘ final live broadcast as a forum for a live marriage proposal and launch of a showbiz career, respectively.

As with 30 Rock‘s maiden live voyage, there were also guest stars aplenty, including Amy Poehler (succeeding Julia Louis-Dreyfus in the role of Flashback Liz); Sir Paul McCartney (wowing the crowd before falling unconscious in Jack’s secret washroom); an ash-faced Jon Hamm as, um, Tracy Morgan’s brother (you can almost hear the nontroversy brewing out in the blogosphere); and Jimmy Fallon (showing up as a young, steely eyed Jack).

Also, as reported prior to telecast, Community‘s Donald Glover was on hand for a flashback to Tracy’s origin as a dancer whose fall onto his coccyx, on live TV, helped him discover the power of a naughty-sounding word. Sadly, that segment was so fleeting and overlapped by studio audience laughter, we didn’t get to enjoy much of Glover’s winning Tracy Morgan impression. Cheyenne Jackson’s “return” was even more blink-and-you-missed-it, though in the West Coast version he got to sing the intro.

Who flubbed first? For the East Coast performance, it was actually Tina Fey when, four minutes in, her tongue tripped over the names of Jenna and Hazel, though others would goof later. Sue Galloway, meanwhile, appeared thisclose to breaking after Hamm showed up in the Amos and Andy riff.

Did you catch 30 Rock, live? What were the highlights for you? And West Coast viewers, consider yourself invited to pass along any changes made for the second presentation.

If you like TVLine, you'll LOVE our email news alerts! Click here to subscribe.
30 Rock Live: Who Flubbed First? Which Surprise Guest Was Your Favorite? Plus: Photo Gallery! 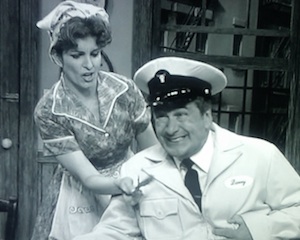