ABC’s Castle will run into an undead end in Season 4’s penultimate episode — and here are some photos from the WTF?! outing.

In “Undead Again,” airing April 30, Castle and Beckett investigate the murder of a man found with human bite marks on his body. When their only witness claims she spied a zombie attack, Rick, Kate et al delve into — no, not a Robert Kirkman novel — but New York City’s zombie subculture to find the killer.

Castle Exclusive: [Spoiler] Is Back for the Season Finale — But Why?

Explaining the late-in-season detour, Castle creator Andrew W. Marlowe told TVLine that as a run-up to “a very emotional finale — where we confront a lot of the issues that [Beckett and Castle] have been skirting all season — we felt like it was important to bring some fun into the show.” And with “zombies very much in the zeitgeist,” thanks to pop culture hits such as AMC’s The Walking Dead, he says, “We thought it was something that was worth tackling.”

Matt’s Inside Line: Will Time on the Couch Lead Beckett into Castle‘s Bed?

What are your thoughts on Castle “biting into” this subject matter? 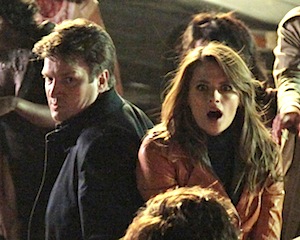