Someone died on ABC’s Desperate Housewives this weekend, maybe you heard — a character played by an original cast member, no less. And that means there shall be a well-attended funeral. Here’s a first look at said sad farewell.

As those who tuned into Housewives on Sunday night saw, Susan’s husband Mike, played by James Denton, was killed in a mob drive-by shooting, after clashing one time too many with a loan shark. And though Susan and Mike happened to share some special moments in the episode, if there’s anything else she has left to express, the weary widow will have her chance next Sunday, in the episode “Women and Death.”

As previously reported, when Denton learned of Mike’s fate, his primary concern was that scene partner Teri Hatcher would have no comedy to play in the expiring sudser’s final episodes. Hatcher, meanwhile, told EW.com she thought the snuffing was “a bad idea,” and she even (unsuccessfully) pitched a story twist where in the finale it’s revealed that Mike secretly entered Witness Protection. 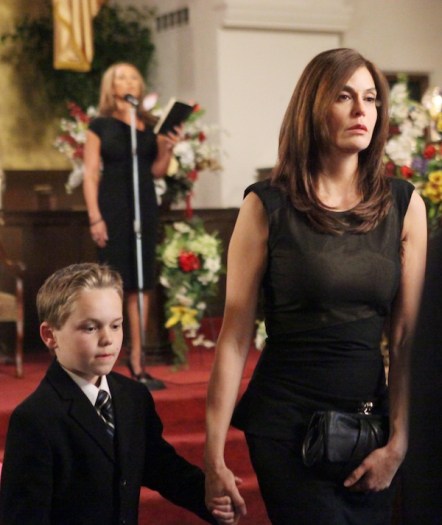