Cassidy Freeman will make her presence known on The Vampire Diaries come March 22 (The CW, 8/7c), and we’ve got a sneak peek at her visit to Mystic Falls in the present. Oh, and brace yourself for the mother of all Meredith twists!

First Look: Vampire Diaries Flashes Back to 1912 With Damon, Stefan and Cassidy Freeman

After appearing in flashbacks in the March 15 episode “1912,” the Smallville alumna’s vampire Sage will meet up with her old pal Damon a century later in 2012. The return of the beautiful friend — and possible flame? — doesn’t seem to please Rebekah, and we can’t imagine she’ll be much happier if and when she finds out the two are plotting to find out what she’s really up to.

But the biggest revelation in the following photo gallery concerns a twist in the Meredith story. Warning: The last picture contains a major spoiler, so think before you click! And if you do click, hit the comments to share your theories! Is it really what it appears to be? 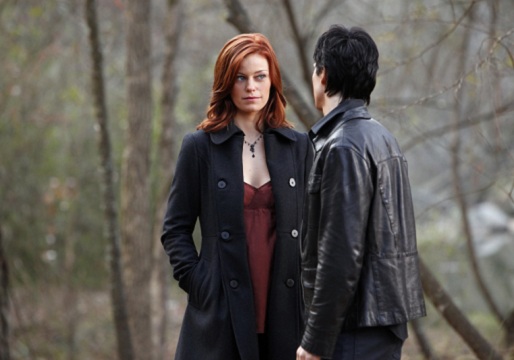