The Vampire Diaries is delivering one of its quintessential flashback episodes on March 15 (The CW, 8/7c), and we’ve got a sneak peek at the time-trippy, circa 1912 hour featuring a very tough guest turn from Cassidy Freeman.

The Smallville alumna’s beautiful vampire, Sage — who also happens to be a boxer —  will reveal how Damon came to be the bad boy vampire we know and love today. But she’s not the only new face we’ll be meeting. The sure-to-be juicy episode — co-penned by executive producer Julie Plec — will also introduce newcomer Lindsey R. Garrett as Elena’s distant relative and Mystic Falls founding family member Samantha Gilbert.
Check out the gallery below and then hit the comments with your thoughts on the new gals (and the return of Damon’s bowler hat!).

If you like TVLine, you'll LOVE our email news alerts! Click here to subscribe.
First Look: Vampire Diaries Flashes Back to 1912 With Damon, Stefan and Cassidy Freeman 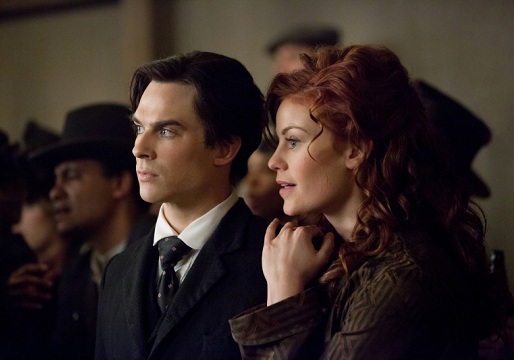