ABC’s Revenge has your perfect Valentine’s Day antidote — an engagement party that ends in murder. And we’ve got a first look at the much-anticipated episode, airing Feb. 15.
After months of betrayal, scheming and lying, we’re back to where it all began with the pilot’s Fire & Ice engagement party for Emily and Daniel… and one dead body in the sand. But is it really the Graysons’ golden boy who’s on the receiving end of that bullet? While Daniel is alive and kicking at Victoria’s fete in the following photos, he is missing from the shot of everyone standing on the beach in shock.
(For any out there still insisting the Revenge pilot’s flashbacks already revealed Daniel as the actual victim, that’s simply not true. Connor Paolo, whose Declan makes the grim discovery, even confirmed for us that Charlotte never got a look at the body before she started screaming her brother’s name, eliciting panic from her mother.)

Speaking of Charlotte, elsewhere in this slideshow she is chatting with Emily and Nolan — which doesn’t bode well for her mother’s sake — and Emily’s got her revenging phone out, which never bodes well for anyone.
Check out the gallery below and then hit the comments with your thoughts on the murder mystery.

If you like TVLine, you'll LOVE our email news alerts! Click here to subscribe.
Revenge Hot Shots: Murder and Mystery at Emily and Daniel's Engagement Party! 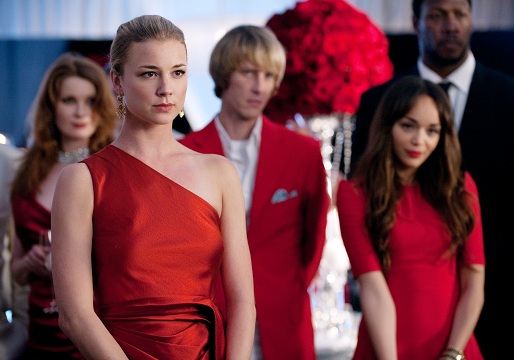