Sorry, Barney and Robin fans. We’ve got a handful of photos featuring the How I Met Your Mother bachelor and the newest lady to catch his eye, Ugly Betty alum Becki Newton, and they do make a rather smashing couple.

As we first reported, Newton’s Quinn will serve as a potential love interest for Barney. But it won’t be love at first sight. “She’s not going to take any s— from Barney,” executive producer Carter Bays teased to TVLine. “This girl is going to kind of beat up on him a little bit. It will be an even match.”

And based on the following images from Newton’s Feb. 13 debut, “The Drunk Train” (airing at 8/7c), the two don’t waste any time.

Check out the gallery and then hit the comments with your snappy judgements!

If you like TVLine, you'll LOVE our email news alerts! Click here to subscribe.
How I Met Your Mother Hot Shots: Barney Meets His Match in Becki Newton 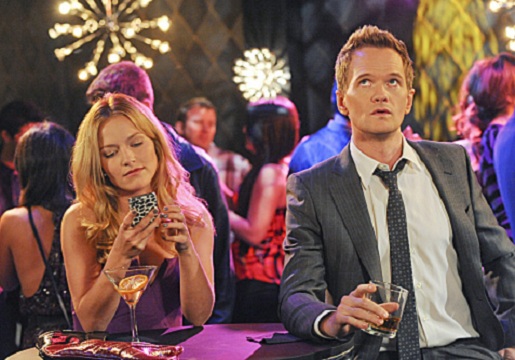