ABC continues to be not-at-all stingy with photos from forthcoming episodes of Once Upon a Time. The latest batch includes sneak peeks at the “Skin Deep” (airing Feb. 12 and featuring Lost‘s Emilie de Ravin as Belle) and “What Happened to Frederick” (airing Feb. 19 and looking chock-a-block with Snow/Charming/Mary/David angst).

“Skin Deep” is set on Valentine’s Day, and while Emma busies herself with some Mr. Gold drama, Mary Margaret, Ruby and Ashley (aka Cinderella’s alter ego, played by Jessy Schram) have a girls’ night out — with one of the gals appearing to take a huge step toward happily ever after.  Meanwhile, in the fairytale land that was, Belle makes a deal in order to save her town from the horrors of the Ogre War, as seen in one green-screen image.

Once Upon a Time Sneak Peek: A Heartbreaking Royal Wedding Nears, and Sexy Red Is Revealed

In “What Happened to Frederick,” Storybrooke’s David decides to tell Kathryn about his feelings for Mary Margaret, while Prince Charming, before bailing on his fiancee completely, agrees to help Abigail with a dangerous mission — one that appears to involve some sort of lady in a lake who, what, morphs into Snow…? I’m at a loss to interpret those pics. Take a look and make your own guess!

If you like TVLine, you'll LOVE our email news alerts! Click here to subscribe.
Once Upon a Time Sneak Peeks: Girls' Night Out, Beast's Beautiful Belle and a Runaway Groom 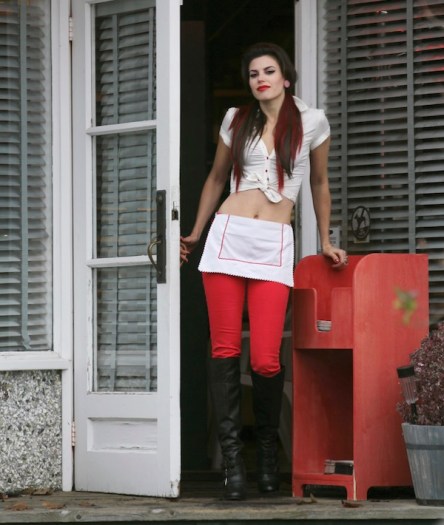