How better to commemorate Gossip Girl‘s 100th episode than with a musical dream sequence? For the milestone event (airing Jan. 30), the CW series stepped it up from Blair’s Audrey-fueled fantasies to have Serena channel Marilyn Monroe’s moves à la “Diamonds Are a Girl’s Best Friend.”

In addition to the blonde, all the guys on the show — Chuck, Dan, Nate and even Louis — join in on “the dance number, and it’s really, really cool,” Ed Westwick tell us. “We had a lot of fun doing it.

“It was really nice for us because we never do anything like that,” he continues. “I felt like I was on Glee for a minute.”

Meanwhile, Serena’s looking back at her past relationships and having some anxiety, teased executive producer Josh Safran, so it’s no surprise she’s dreaming of Blair’s Audrey stealing her man, Dan.

Check out the sneak peek below and then hit the comments with your thoughts. 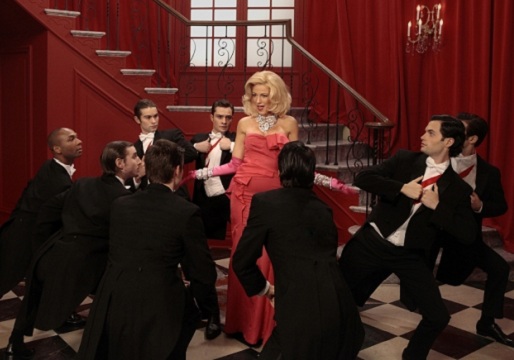