The following contains spoilers from the series finale of ABC’s One Life to Live.

Well that was different from a crazed J.R. chandler firing gunshots into a crowded room.

ABC’s One Life to Live — perhaps having learned a lesson from how its sister soap, All My Children, frustratingly sewed things up (having done so under the impression that life would go on online) — zagged where that show zigged and served up a bevy of heartwarming moments capped by, yes, one cliffhanger reveal, but nothing nearly as random as what went down in Pine Valley.

One of the biggest crowd-pleasers concerned the true, absolute and undeniable paternity of Jessica, who in recent years had been retconned as born of Mitch’s seed. Well, the retcon got retconned as Clint and Viki opened up new DNA test results that proved Jess is a blue-blooded Buke, tried-and-true. That reveal, in and of itself swelling with emotion, was only amplified by knock-out performances by Erika Slezak, Jerry ver Dorn, Bree Williamson and Melissa Archer, each of them undoubtedly assisted by streaming tears that were real.

As a kicker to that — not that it needed one — a reflective Clint got down on bended knee and proposed anew to Viki, with both Slezak and ver Dorn visibly moved by the moment as actors as much as characters.

Similar real-life waterworks were on joyous display when Bo and Nora, in the wake of Destiny giving birth to her and Matthew’s son, aptly and wonderfully named “Drew,” reaffirming their love for each other. One “I love you, Red” was all it took to cue up the VCR in our heads, which somewhat made up for a lack of on-screen flashbacks.

Elsewhere during the too-short hour: Brody stopped by to see Jessica, proving himself to be well and perhaps on his way back into the armed forces, and Cole showed up as Starr’s “bodyguard,” in part to report that his father, Patrick, was alive.

But such kiddie stuff took a big back seat to the Buchanans’ story, as well as the sort of scenes that Todd and Blair fans have waited far, far, far too long for. Together and alone at last, though not without a couple starts-and-stops, Todd eventually let himself fall into Blair’s arms, and they made (off-screen) love. As small comfort for TnBers, there was a prolonged afterglow moment complete with Roger Howarth shirtlessness (though those moments are conspicuously if not surprisingly missing from the ABC photos shared below).

Lest things end on too euphoric a note (did someone say “encore”?), John and the LPD came busting in on the lovers, to arrest Todd for the murder of Victor Lord Jr. However….

The finale closed with the hour’s narrator, Allison Perkins, throwing her script at the bound-and-gagged familiar face she had been reciting her “One Life to Live” tale to: Victor Lord Jr. himself, very much alive.

I may have missed a few notes; TVLine’s Meg Masters will be here later to fill any blanks. But for now, tell us what you thought of the finale. And how do you think Todd, Blair, John and Starr will migrate to General Hospital‘s Port Charles? 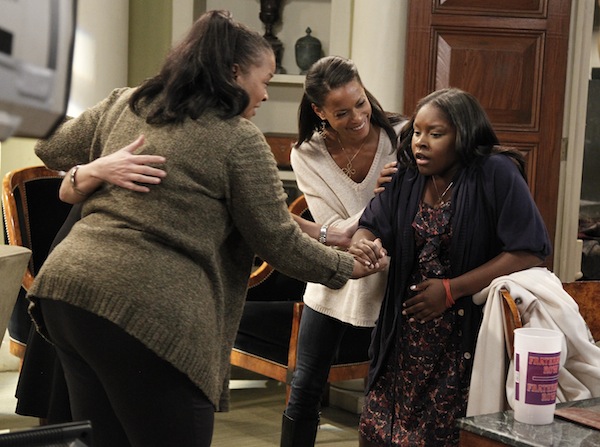