Whereas the alt realities on Fringe tend to be eerie and scary, the one being presented on ABC’s Grey’s Anatomy this Feb. 2 appears to be made of awesome and fun.

As Shonda Rhimes shared as part of our in-depth Q&A last week, the “If/Then” episode will explore how Meredith’s world — and the lives of others — might have been different had her mother, Ellis, not developed Alzheimer’s.

Why Can’t Grey’s Anatomy‘s Cristina Just Hug It Out? And More TV Questions!

For one, Rhimes noted, Meredith is “bright and shiny” versus dark and twisty, making her not an automatic BFF for Cristina Yang. And because Mer’s mom stayed with Richard, the Chief had less time to mind Bailey, leaving her to not evolve into the “Nazi” but remain meek. Also keep an eye out for Derek and Addison, who remained together, and Callie and Owen, who apparently became a “thing.”

But I don’t think anyone prepared us for what Alex is looking like in this scenario — and yet nonetheless he got the girl, as evidenced by the sparkler Mer is waving around in front of her gal pals (while Mercy West transplant Dr. Denman looks on, alive and well).

Flip through the slideshow below and visit the “alt reality” for yourself…. 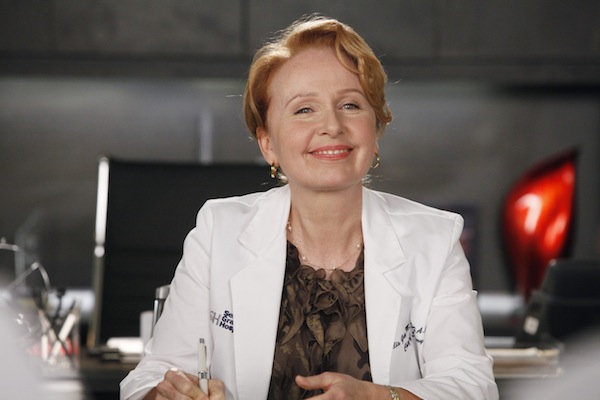