Is the honeymoon over for Jack and Fake Amanda on Revenge? It certainly looks that way in the following photo gallery for the ABC series’ second episode back, airing Jan. 11.

According to the official synopsis, “Jack finally lets his guard down with Amanda” — but it’s her inhibitions that are really coming down as she gets rowdy in the Stowaway, Coyote Ugly-style, and starts making out with a pretty young thing of the female variety!

Maybe it’s all just a part of some evil plan. After all, the Emilys fake and real are toasting… what, a job well done? Whatever the case may be, poor, clueless Jack does not look happy about his sweetheart’s roving lips.

Check out the gallery below and then hit the comments with your thoughts and theories. 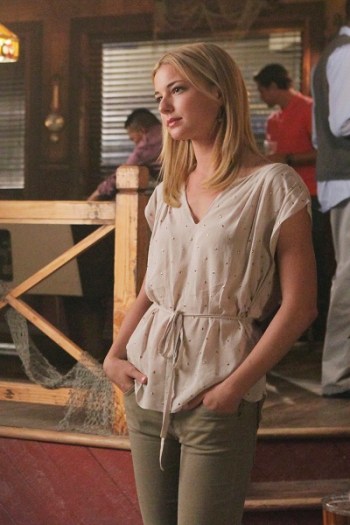