Grey’s Anatomy resumes its eighth season on Thursday, Jan. 5, having left viewers with a few pre-holiday cliffhangers — and we’ve got some pics from that first episode back.

The fall finale closed with Meredith and Alex seemingly out of harm’s way after the ambulance they were transporting a newborn in got broadsided by an SUV on a dark, slick road. (Alas, the other vehicle’s passengers were not nearly as lucky.) Also, Teddy’s husband Henry had died during his latest surgery, but Owen and others held back on notifying her as she wrapped up her own operation on another patient.

Based on the photos below, Meredith is unscathed and accounted for, though Alex is MIA. Similarly, Teddy is nowhere in sight (though neither is Cristina, the one who unknowingly operated on Henry and later was devastated to learn he, albeit unavoidably, died on her table).

On a lighter note, as first reported by TVLine, this is the episode where Lexie must work alongside not just Mark but also his new girlfriend Julia (played by Holley Fain). Awk. Ward. (Though Lexie seems smiley enough about the whole thing.)

Grey’s Anatomy Exclusive: Derek and Addison Reunite, But There’s a Doozy of a Twist!

The official synopsis for the winter premiere, titled “Suddenly,” reads: “A severe car crash involving an entire family results in an all-hands-on situation in the ER, as the eldest daughter is left to make the toughest decision of her life. Meanwhile Teddy, still in the dark about Henry’s death, calls upon Cristina to help with her patient in the O.R., and Lexie finds herself working alongside Mark’s new girlfriend, Julia, during an eye surgery.”

If you like TVLine, you'll LOVE our email news alerts! Click here to subscribe.
Grey's Anatomy Hot Shots: Who Is Missing in Action? And Is Three a Crowd for Mark/Lexie? 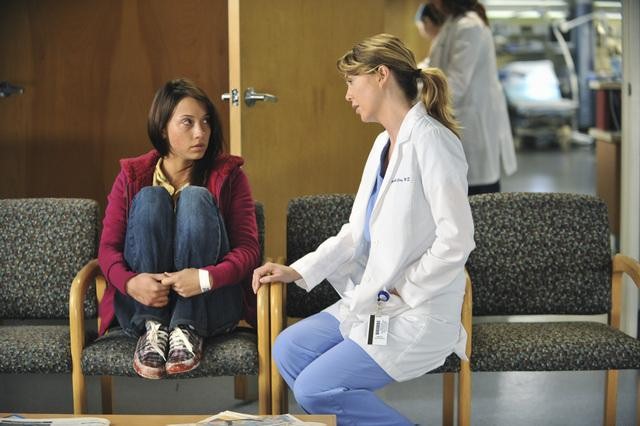