The family visits keep on coming this season on Bones.

In this Thursday’s episode (airing at 9/8c on Fox), Booths’ grandpops (Ralph Waite) drops in to deliver some bad news to his grandson. But next week’s installment promises a scary familial encounter too, as you can see in the photos below, albeit in a different way.

Deprived of sleep, Angela and Hodgins give in to having her rock star dad (returning guest star Billy F. Gibbons) babysit their little baby boy Michael, who looks perplexed by his less-than-cuddly looking grandpa. Thankfully, grandpa came prepared with an adorable toy guitar.

Meanwhile, Booth and Brennan have to hide out in a tornado shelter while investigating the murder of a storm chaser. Combine that with the dad-to-be’s growing over-protectiveness of Brennan at home and at work, and you’ve got a recipe for a perfect storm. (OK, you can groan now.) 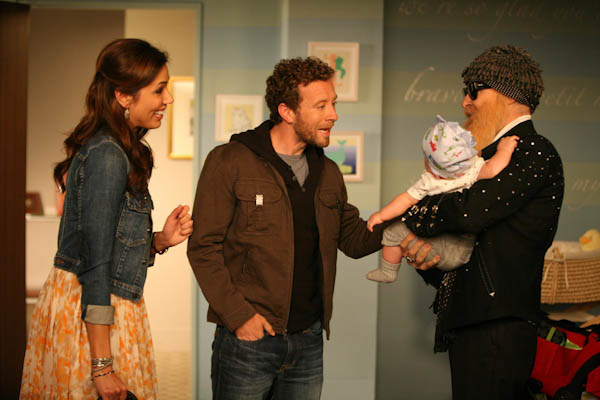