By the end of this Thursday’s Community, you’ll have added a new word to your vocabulary: britta.

A verb created by the Greendale gang invoking the name of one study-grouper, to “britta” more or less means to screw up royally. Case in point: This year’s Halloween-themed installment of the NBC comedy revolves around Britta embracing her new psych major and in doing so, she brittas the group’s holiday pre-party. For viewers though, Britta’s brittaness makes for a whole lot of funny.

TVLine hit the set for the spooktacular ep and got scoop from the cast on the standout moments you can look forward to seeing.

WHAT’S THE STORY? | The study group’s third Halloween at Greendale finds them spinning a variety of scary (and weirdly hilarious) ghost stories. As Joel McHale explains, “Britta has written a psych test and basically discovers that one of the group’s members is psychotic. So, we’re trying to figure that out through whose story is the most deranged — and Pierce’s alone is incredible!” Alison Brie says that fans of previous epic escapades should love this one even though it may seem slightly more subdued. “It’s just as graphic and as cinematic as ever,” she tells us. “It actually contains some of our more outlandish costumes because it’s the characters having fun with each other, putting one another in these weird scenarios.” (See proof at right: Abed wears a do-rag and Troy rocks some serious Coolio hair.)

ZERO ZOMBIES | Though Season 2’s zombiepocalypse set the bar high for future Halloween episodes, Community has done it again. “Last year was as crazy as it gets because we ate tainted army food and turned into the undead,” Joel McHale deadpans. “But this year’s is just as funny — and I’m not just bragging.” Adds Danny Pudi, “It’s different in that the first two Halloween episodes were very physical, and this one is a little slower. Everyone is just telling a story, and I just love the idea of seeing what each character thinks is an appropriate ‘scary story.'” Speaking of…

HOW TO GIVE UP THE GHOST (STORY) | Abed’s secret to hawking a horror tale is simple: follow the rules. “Abed has a very structured idea of what a scary story should be,” Pudi says with a laugh. “He’s seen it all and knows exactly what works and what doesn’t, so if he’s going to do a scary story, he’s going to make sure these people are not falling for the same things that everyone else does. He’s a Boy Scout in terms of horror.”

A HEAVENLY TALE | We won’t spoil Shirley’s story for you — because it’s that funny — but here’s what Yvette Nicole Brown reveals: “Shirley is not a fan of horror stories or Halloween or anything like that — it’s not her bag. She does have her own story though, and it’s exactly what you would expect Shirley to tell. It’s so her.” Any guesses?

ANNIE’S BOOBS ARE BACK… | “And I don’t mean the monkey,” Brie teases playfully. She’s right, though. There is lots of cleavage (from all the ladies!) to behold on this boo!-tiful occasion. “We’ve passed the point of not sexualizing Annie,” her portrayer laughs. “The boobs come out in this episode more than ever — more than in paintball!” Brie though says she’s “embracing it” even though she did have a slight nip-slip while shooting Annie’s demented version of a scary story.

A KISS… BEFORE DYING?! | Abed gets some lovin’ in his Halloween fantasy — and that’s all we’re going to say about that.

Take a peek at more photos from Community‘s Halloween fun below, and then hit the comments with whose horror story you’re most excited to see! 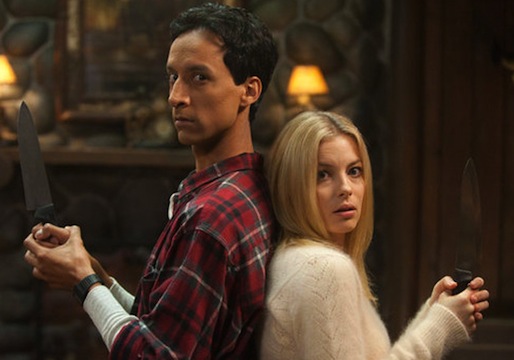