In this cycle’s third episode, airing next week, the series will travel back in time to the 1920s to reveal Stefan in a tux. OK, there’s more to the hour than how dapper Stefan used to be, but can you blame us for being distracted by the formal wear?

The episode, titled “The End of the Affair,” also reunites Stefan with Bex (Pretty Little Liars‘ Claire Holt), a girl from his past who’s “a reminder of how sometimes being bad wasn’t so bad at all,” says executive producer Julie Plec. Meanwhile, Damon and Elena follow Stefan’s trail after Damon gets a tip and Tyler turns to Sheriff Forbes out of concern for Caroline. (Hey, Tyler, your mom probably has her locked up in your werewolf dungeon.) 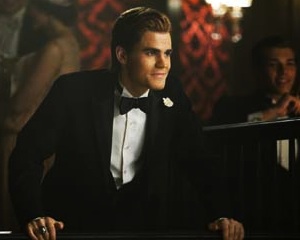