ABC’s Modern Family — aka the Pritchett-Dunphy clan — saddled up in style for their hour-long season opener airing Wednesday, Sept. 21. And we’ve got a series of photos from the location shoot in Jackson Hole, Wyoming.

The set-up: The extended brood takes a summer-ending jaunt to a dude ranch — that is, once Phil’s bid to attend family camp gets outvoted. But looking on the bright side, “Phil decides it will be a chance for him to once again demonstrate to Jay that he is a worthy son-in-law,” says exec producer Christopher Lloyd. “So Phil does a lot of practicing in the driveway — like, shooting a gun and roping things.”

Mitchell and Cameron, meanwhile, see an opportunity to discover their macho side, as they come to terms with the notion of becoming fathers of a boy.

Even Hayley’s rocker beau Dylan goes along for the ride. And P.S. That’s Tim Blake Nelson playing the family’s instructor at the dude ranch. P.P.S. Claire in pigtails again!

Are you looking forward to welcoming the Family back into your homes? 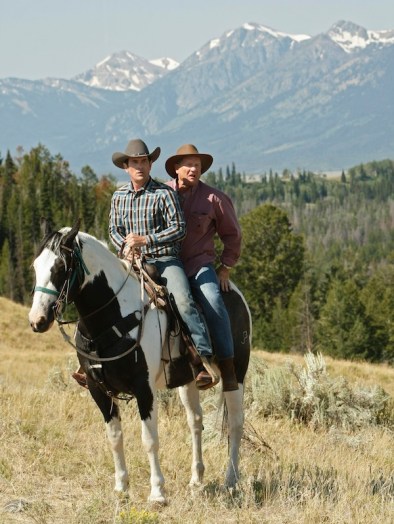