Big Brother‘s 13th cycle — dubbed “Double Trouble” — will feature eight brand-new houseguests, the return of “some of the most notorious duos” from seasons past, and a very colorful house. (Get your sunglasses on….)

The “duos” won’t be revealed until the CBS summertime staple’s July 7 premiere, but because we spy 14 spots on the “memory wall” — and because we took math — expect three pairs of familiar faces to pop up at the Venice Beach loft-inspired digs. Per CBS, these top-secret encores “will immediately impact the way the game will be played.” You can vote on who you think is coming back at CBS.com.

The newbies, meanwhile, include (clockwise from top left) Cassi, 26, an Olivia Wilde-esque model based out of Nashville; Dominic, 25, a college student (post-grad, we hope); Kalia, 30, a writer from Los Angeles; Adam, 39, a music inventory manager from Hoboken, N.J.; Shelly, 41, an “outdoors industry exec” from Louisiana; Lawon, 39, a legal somethingoranother; Porsche, 23, a Miami Beach “VIP cocktail waitress”; and Keith, 32, an HR exec from Illinois.

About the house: Per CBS, it boasts “an urban design that brings the outside décor in and the inside décor out.” Okayyyy. It also features a Frank Gehry-inspired bedroom, classic surfboards mounted on the walls (handy!), a Tarot Card Parlour and something called a “Popsicle Room.” (Maybe Porsche can explain that one?) Check out the photos here:

If you like TVLine, you'll LOVE our email news alerts! Click here to subscribe.
Big Brother Reveals 'Double Trouble' Twist - Plus Check Out the New House! 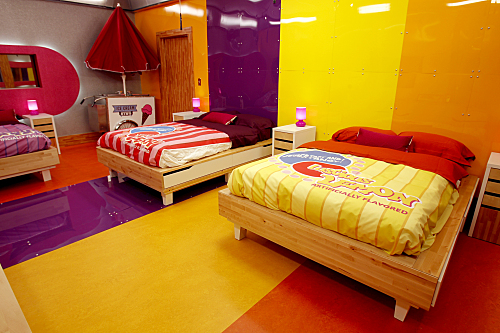