Since Breaking Bad didn’t air during this year’s Emmy eligibility period, its star — three-time Outstanding Lead Actor in a Drama Series winner Bryan Cranston — isn’t able to vye for a fourth consecutive statuette. In other words, the field is wide open for someone like the oft-nominated Hugh Laurie of House or Jon Hamm of Mad Men, or a sleeper like Kyle Chandler of Friday Night Lights, or an old favorite like Tom Selleck (now of Blue Bloods), to grab the gold. Who will it be? Let’s take a look at the most likely — and a few less likely — suspects.

Review this slideshow of the major contenders — including TVLine’s Dream Nominees — then vote below for who you think are the six best. And check back Monday for our preview of the Supporting Drama Actress race!

If you like TVLine, you'll LOVE our email news alerts! Click here to subscribe.
Emmys 2011: TVLine Previews the Lead Drama Actor Race — Including Our 6 Dream Nominees 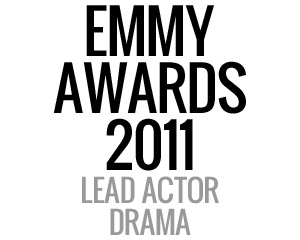