Smallville fans have much to be excited for as the series enters its final two weeks.

Just last night, a new promo for “Prophecy,” the penultimate episode airing May 6, let slip a glimpse of such infamous DC Comics baddies as Black Manta, Captain Cold and Solomon Grundy. The CW also has released the first of two batches of photos from the two-hour finale airing May 13.

Showcased in this salvo of pics are Tom Welling (as, of course, Clark Kent), Erica Durance (luminous as lady love Lois Lane) and Michael Rosenbaum (reprising his role of Lex Luthor). Things look a bit tense in many of these scenes, but we are promised that Batch No. 2 will depict happier times as Clark puts that tux shirt to proper use, as a bridegroom.

“It’s safe to say that there are highs and lows in the finale,” Smallville executive producer Kelly Souders tells me. Teasing what’s to play out in the two-hour series-ender, she says, “We are very appreciate of the fans who have stuck through this longer than most marriages last, so we want to deliver payoff as best as we possibly can. At the same time, we have to be pushing off to when Clark really becomes Superman, and his final showdown on Smallville.”

Yep, she dropped the S-bomb. So drink that in as you flip through this super photo album: 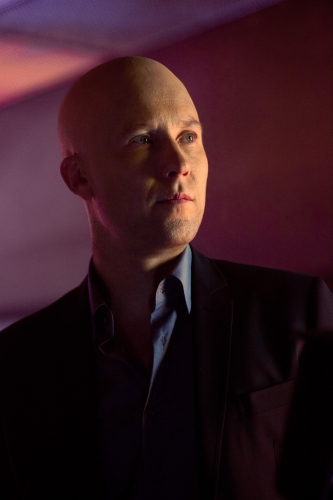