Hopefully for the fine folks in ABC’s photo department, Shonda Rhimes is somewhere nodding in approval of the pics just released for the penultimate episode  of Grey’s Anatomy‘s current season — because boy (or as the case may be, girl) do they seem spoilery.

The air date: Thursday, May 12. The place: Seattle Grace’s pediatric unit. The faces: Meredith, Derek, Arizona, and a little someone we will dub Baby Jane Doe.

In the series of photos, Mer and Der are seen discussing something with Arizona, and alternately hugging the wee one. Derek in particularly seems to bond strongly with the lass. (Or, he could just be relieved he doesn’t get shot in this finale.) Oh, and in Mer’s hand: a copy of Your Baby’s First Year.

Something such as the adoption of, say, an abandoned/orphaned baby is in keeping with what Rhimes told TVLine’s Michael Ausiello about the season finale airing May 19. Titled “Unaccompanied Minor,” that episode will leave Mer (among others) “in a position that’s surprising” — to them as well as viewers. “Fans are going to be very surprised about a lot of the things that happen.”

Do you think that’s where we are heading? Or could these photos not be as they seem? And how nice is Derek’s watch? Think it’s one of those super-expensive kinds only a world-class doc can afford? 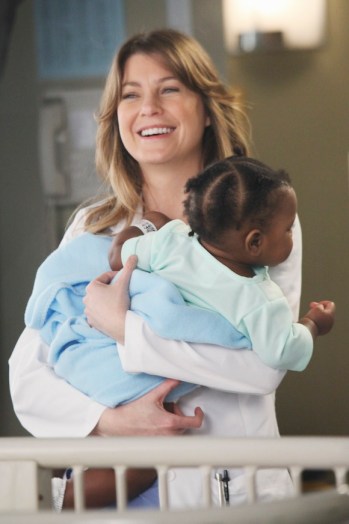