Dancing With the Stars pro Karina Smirnoff has uncorked one of her boldest moves yet, posing for the cover of the May issue of Playboy — as well as nude inside.

Though DWTS would seem to relish any publicity, there was some talk that Smirnoff’s decision to go au naturale for the gentlemen’s magazine would bite her in the butt. “She can kiss her dancing days goodbye,” one unnamed source told a gossip blog, which also quoted an “ABC insider” as saying that since the network’s top-rated reality series is “a cash cow… they are not going to allow its reputation to be soiled.”

Yet any suggestion that ABC was blindsided was countered by what one show source told People.com — that Smirnoff’s bosses “did know ahead of time, and they still gave her one of the best pairings” for the current season.

Peruse Smirnoff’s (SPOILER ALERT: REVEALING!) Playboy cover, then read on for why she decided to doff her duds: 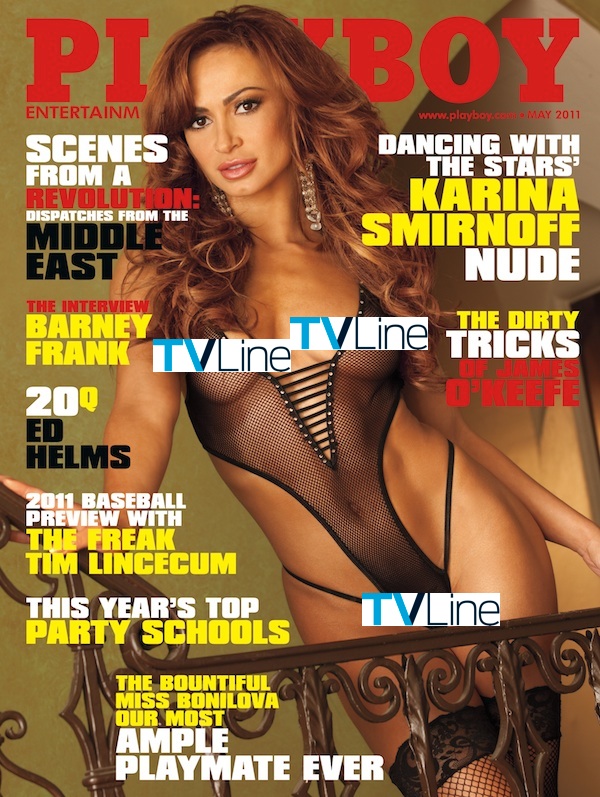 “As a dancer I’ve always embraced my body,” Smirnoff says in the story accompanying her nude, eight-page pictorial. “I’m thrilled to show off my strong, toned physique … and celebrate my sexiness. To me, sexy is the confident energy a person produces. Sexy is the comfortable feeling of being who you are. Sexy is not just having beautiful lips, legs and arms; it’s beyond that. Sexy is soul.”

Is Karina your first pick of the Dancing pros to pose for Playboy? And do you think she should be penalized for parlaying her fame from a relatively family-friendly program into something so provocative?